In discussing the history of the French Bulldog, we should note the importance of three countries: England, France and America. England provided the foundation for our modern Frenchie: the old bulldog. Breeders in France developed the smaller bulldogs into a distinctly “French” type and American breeders set the standard that prescribed the all-important “bat ears.” We begin with the bulldog in England, where so many of our AKC breeds originated. The ancestral type was not our modern bulldog but the bulldog of 150-200 years ago: a strong, athletic dog, high on leg, and capable of being used in that barbarous activity called “bull-baiting.”

Many English bulldog breeders began to change the breed around this time to a bigger, heavier dog with exaggerated features. Others crossbred them with terriers resulting in the bull-and-terrier breeds used for dogfighting, ratting, etc. Another group of breeders developed a smaller, lighter toy bulldog, around 12-25 lbs in weight, having either upright or rose ears, round foreheads and short underjaws—and perhaps a touch of terrier liveliness. These were quite popular with workers in the English midlands, in particular the artisans in the lace-making industry around Nottingham.

When the Industrial Revolution closed down many of the small craft shops, these lace-makers emigrated to the North of France—and they took their little bulldogs with them. The popularity of these little dogs spread from Normandy to Paris and soon the English breeders had a lively trade, exporting small bulldogs to France where they began to be called Bouledogues Français. They were favorites of ordinary Parisians such as butchers, cafe owners and dealers in the rag trade and became notorious as the favorites of the Parisian streetwalkers, les belles de nuit. The famous artist Toulouse Lautrec depicted in several works Bouboule, a Frenchie owned by Madame Palmyre, the proprietress of a favorite restaurant “La Souris.”

Society folks noticed these cute little bulldogs and before long they were a la mode. Most of the British wanted nothing to do with these French bulldogs so it was the French who were guardians of the breed until later in the 19th century. They developed a more uniform breed—a dog with a compact body, straight legs, but without the extreme underjaw of the English Bulldog. Some had the erect “bat ears’ while others had “rose” ears. Wealthy Americans traveling in Francefell in love with these 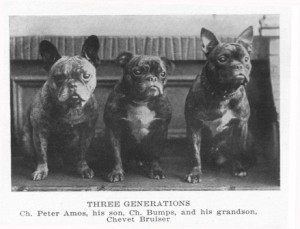 endearing little dogs and began bringing them back to the USA.  The Yanks preferred dogs with erect ears which was fine with the French breeders as they preferred the rose eared specimens, as did the British breeders.

Society ladies first exhibited Frenchies in 1896 at Westminster and a Frenchie was featured on the cover of the 1897 Westminster catalog even though it was not yet an approved AKC breed. 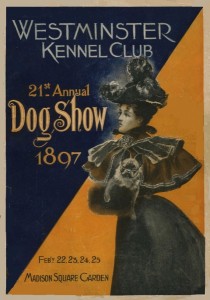 At that show, both bat eared and rose eared dogs were exhibited but the English judge put up only the rose-eared specimens. This infuriated the American fanciers who quickly organized the French Bull Dog Club of America and drew up a breed standard allowing only the bat ear. At the 1898 Westminster show, the Americans were outraged to find that classes for both bat-eared and rose-eared dogs were to be shown despite the fact that the new breed standard allowed only the former.  They pulled their dogs, the American Judge refused to participate in the show, and the club organized their own show, for bat-eared dogs only, to be held at the luxurious Waldorf-Astoria. 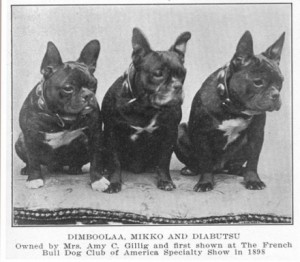 This was the famous first specialty of the French Bulldog Club of America — which, incidentally, was the first breed club anywhere in the world to be dedicated to the French Bulldog.  The winner of that first Specialty was a brindle dog named Dimboolaa, seen here.

Popularity of Frenchies skyrocketed, particularly among the East Coast Society folks. After World War I the breed’s popularity began a decline that would last for the next fifty years.  The enormous popularity of another small brachycephalic breed, the Boston Terrier, probably contributed to this. Also many Frenchies had problems whelping naturally; it would be years before safe veterinary cesarean sections would be routinely performed. Hot summer months, before residential air conditioning became common, were rough going for the dogs. And interest in purebred dogs generally declined during the Depression of the 1930s. A small number of Frenchie breeders in America and Europe kept the flame alive but by 1940 French Bulldogs were considered a rare breed and only 100 were registered with the AKC. The years during World War II were difficult for all dog breeders and especially for those in Europe where many fine dogs starved or were put down for lack of food.

Heretofore most Frenchies were brindle with a few pied and white dogs. Creams and fawns were rare and not particularly popular until the 1950s when a breeder from Detroit, Amanda West, began showing cream Frenchies with phenomenal success. Her dogs, mostly creams, tallied over 500 group wins and 111 Best in Show awards as well as 21 consecutive breed wins at Westminster. From then on, creams and fawns were more and more common in the show rings. But Frenchie registrations totaled only 106 in 1960 and an article in the AKC Gazette stated, “There are many advantages to owning a dog of this breed but there are very few bred and very few exhibited. If the trend keeps on, eventually the breed will become extinct. . . No one wants to see the breed overpopularized but certainly the breed deserves to be known and appreciated by the public.”

The 1980s witnessed a rapid rise in Frenchie registrations due to a newly energized French Bull Dog Club of America that included younger breeders who transformed the annual specialty shows into major events and who contributed to The French Bullytin, a new magazine devoted solely to Frenchies. The 1980 breed registrations were 170 and by 1990 were 632. Since then, the popularity of these little dogs has soared and over 5,500 dogs were registered in 2006. Nowadays it’s not that uncommon to see Frenchies featured in ads, movies or in stories about celebrities. This skyrocketing popularity can be scary for those of us who love the breed and who fight a constant battle to maintain breed type and minimize those health problems to which Frenchies are subject. Unscrupulous breeders and importers complicate the picture. Let’s hope that today’s successes are not a passing fad and that many future fanciers will enjoy all that can be offered by this most companionable breed.

Copyright © 2012-2015 blauwebulletjes.nl, All rights reserved.
Back to top